Thank you for viewing my interviews Saturday and today Monday on Fox & Friends. 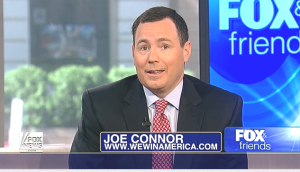 As we discussed on the show, not only am I a 9/11/01 family member (cousin Steve Schlag was murdered) but I am also an eye witness to the attacks. I get particularly aggravated when baseless truthers / liers and anti-semites deny what happened that day; the murders of so many innocent friends and family by Islamic extremists.

This group we discussed is planning a 9/11/13 march on Washington to protest some imagined infringement on their rights. Incredibly, while the constitution is being shredded regularly now, their right to peaceable assembly (unlike in their homelands) will be properly guaranteed by the first amendment, yet they are protesting. The world is completely upside down!

Seems this group has less than a dozen members so “one million Muslims” will turn out to be a few lost souls who will dismiss the memories of those 3,000 innocent people killed and mock the pain survivors and family members will endure all their lives. This is a group desperately looking for attention but really should be ignored.

They claim solidarity with the American People. So why would they choose to protest on September 11?
Here’s why:
• The publicity and donations that go with it
• To incite / provoke people hoping that they or the media will film some kind of confrontation that they can claim proves their flawed premise
• To claim the date, 9/11 and our tradition of protests, in the name of Islam like they did by putting mosques at Ground Zero and throughout history in places like Spain and the Middle East

The United States Government has contorted itself to the peril of its own citizens to appease Muslims since 9/11/01 so for this group to claim any discrimination is in itself a provocation.
• Fort Hood murders are called workplace violence not terrorism
• Our president and our own government will not articulate our Islamic enemies. Without defining our enemies and fighting for victory instead of avoiding attack, we will not win this war.

The American people have been nothing but tolerant of people who have no tolerance for us.
• Can they site any hate acts towards Muslims?

Let them assemble as is their right but the media should not cover the story nor should we give them the satisfaction of confrontation.

Please make your voices heard and if you agree forward this along as appropriate.

2 thoughts on “Million Muslim March for their rights on 9/11? The world is upside down. Joe talked about it Saturday, August 17 and Monday, August 19 on Fox & Friends”