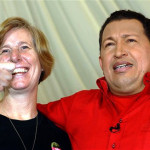 Of course you do. She was the woman whose son was tragically killed during the Iraq War in 2004. When she embarked on her one woman crusade to protest President Bush’s decision to go to war, she became a mainstream media darling. She practically had 24/7 coverage on all major networks as well as favorable print attention for years. Her overnight celebrity status has propelled her to announce that she will run for governor of California in 2014 as the socialist candidate, citing Hugo Chavez as her biggest inspiration.

Of course you do not. She tragically lost her son during the Benghazi attack on September 11th of last year. She is not an anti-war protester; she just wants some answers from the Obama administration on the detail of that night. Halley’s Comet will return before you see Smith on CBS, NBC or ABC.

We all know there is a blatant media bias in the United States today. It was evident throughout the Bush era and glaring during the 2008 presidential campaign. From the lack of basic journalism in vetting the current president to the continued pandering and non-reporting of Obama’s unconstitutional actions in office, the media has maintained their unconditional love for their leader. They were so married to the idea of the first black president that they are blinded by his amateurish conduct as the leader of the free world.

Which brings us to the latest example of the mainstream media bias; the potential military strike on Syria.

Obama aggressively announces that the United States has to move militarily on Syria because of the chemical weapon attack on the Syrian people by their own leaders. He announces that we are hours/days/weeks away from launching a strike. Nowhere does Obama mention the threat to America’s welfare or why Syria’s hierarchy would choose such a terrorist act while the UN inspectors were there to investigate Syria’s chemical weapon capabilities. Only after political pressure does the President announce he will go to Congress for a vote.

So with America and a host of other countries on the verge of starting World War III, the question of the day is as follows:

Where are all the anti-war protesters?

It may not be the paramount question being asked today. But don’t you find it curious that nobody is protesting our potential involvement in a war in which, when you break it down to basics, the United States would be fighting alongside the group that committed the biggest mass murder on U.S. soil, Al-Qaeda?

So, where are all the anti-war protesters? The answer may surprise you.

They are everywhere. Protesters have been out in force across the United States and other countries for weeks. They have been a vocal contingent in Los Angeles and among the tourists in New York’s Times Square. Houston’s Syrian-American population continued to be outspoken in its opposition to America’s intervention as Congressman Tim Kelley joined the anti-war group outside a federal building in Seattle. Hundreds of Bostonians opposed to a Syrian attack rallied in Boston Commons, then walked to John Kerry’s home on Beacon Hill to express their views, even leaving notes on Kerry’s door that stated “Stay out of Syria”, before finishing their peaceful gathering at Faneuil Hall.

Didn’t catch any of this on CNN or MSNBC? Shocking……..

Not a day went by without seeing Cindy Sheehan or any war protester in the mainstream media while Bush was in office. But in today’s world, with network darling Obama in office, nary a word of news regarding any protest. The media complex has too much invested in our weak and inept president for its reporters and writers to do what they learned in journalism 101, which is report the truth.