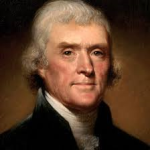 We are at war.

With another cowardly beheading of Steven Sotloff and taunts against the US, the evidence is clear and we must lead the civilized world to take overwhelming action against the evil barbarians.

We have done this before.

In Thomas Jefferson’s autobiography he describes putting together a coalition to fight the Barbary Pirates, “I was very unwilling that we should acquiesce in the European humiliation of paying tribute to those lawless pirates, and endeavored to form an association of the powers subject to habitual depredations from them.”

Jefferson put together a multi-point agreement among the US, Portugal, Italy (citi states at the time), Malta, Denmark, Sweden, France, and other nations (like England and Spain) who may join to combat those Islamic extremists.)

While financial and political issues at home dictated that we paid tribute for several years until the Barbary War during Jefferson’s presidency, this is another case of the founders dealing with and anticipating consequences.

Jefferson knew these Islamic terrorists, like ISIS had to be forced into submission. The founders knew appeasement would only encourage them and didn’t want one country to bear too much of the military or financial burden of destroying them.  They also understood that monetary contributions were as important as the military hardware and personnel.

As we pointed out in The New Founders, we must learn from the founders; for they addressed all the issues we face today.  While times have changed, righteous principles, human nature and evil have not.

Like the founders, we have to identify evil and lead evil’s destruction.