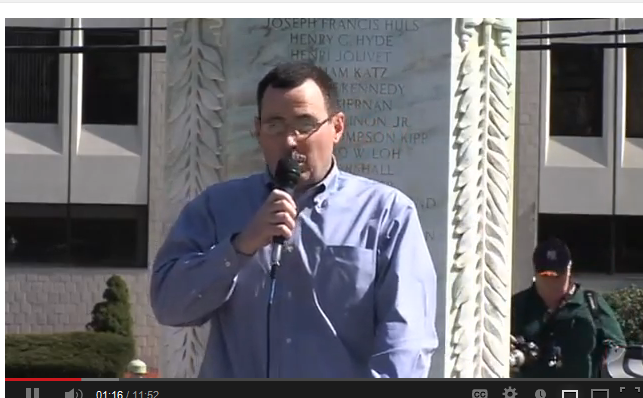 We the People shows no classes, just Americans.   We need to live today by the truth of these simple words. They have rarely been as important as they are at this moment in our history.

Liberalism may sustain us but will never fulfill us….
Following is the text from and video of Joe Connor’s words at the We the People rally on the green in Teaneck, NJ.  (To view Joe’s speech at the 2011 Tea Party Tax Day Rally, please click here) Joe discussed the simple power of those three sacred words, “We the People” and went on to provide, in a very personal and universally simple metaphor, the difference between surviving and LIVING.  Joe concluded by framing the current Second Amendment debate, as not about guns, but about our liberty; ending with:

We the people of the United States, in order to form a more perfect union, establish justice, insure domestic tranquility, provide for the common defense, promote the general welfare, and secure the blessings of liberty to ourselves and our posterity, do ordain and establish this Constitution for the United States of America.

We the People…a great title for today’s event.  We the people…….

Three simple words that we all have heard, used and thrown around our entire lives.  You may have first heard them, like I did, watching School House Rock during Saturday morning cartoons. But did we stop to understand their meaning?

New York native, Gouverneur Morris, credited with writing the preamble of the Constitution I just recited and James Madison, reluctantly known as the father of the constitution, penned these simple words to show that our constitution was created by and for the everyday citizen and that Americans are one people.

We the People shows no classes, just Americans.  By using the singular word “people” rather than the plural, “peoples” they show that Americans are united, The United States is one land and we all have equal opportunity to pursue our God given individual talents and goals. We need to live today by the truth of these simple words. They have rarely been as important as they are at this moment in our history.

Today we have purposely been cast into class warfare, divided among racial lines; our individual rights have been stolen as the left Orwellianly usurps our language.

To many in 2013, We the People has fallen to Them the Government.

Together we meet in Teaneck, NJ, the town of my birth, where in 1962 a young couple, Mary Anne Lynch only 5 years removed from her native Ireland and Frank Connor the son of immigrants married, took a small apartment on Queen Anne Rd and started a family.  Here they began the American Dream until in 1975 it was shattered when 33 year old Frank was killed by terrorists dedicated to destroy us and whose descendants now govern our nation.

The American dream did not die with Frank. It has lived on in Frank and Mary’s sons.  I stand here today reflecting on and drawing strength from my father and our forefathers who over 220 years ago risked the hangman’s noose to guarantee inalienable rights to their fellow Americans, their progeny and for the timeless Constitution that immortalized those God given rights.

Like the simple phrase, “We the People” the founders understood the simple truths of life and man. They understood that the Individual is the vessel of society and as the rising tide raises the ship so does the elevation of the individual raise the level of society.  And how does the individual raise his level?  It does not take a village, but quite the opposite.  It takes parents, family, faith and the removal of impediments to ambition.  We the people must remove the Nanny state government imposed barriers of confiscatory taxes, intrusive laws and regulation that torments our human will to succeed.

Through all this, I think it is fair to say that the nanny state wants Americans to survive.

These two sentiments, so similar on the surface show how diametrically opposed our visions for America are.

We need leaders who believe in, live by and who can clearly articulate these simple concepts and differences.

Liberals see the old cradle to grave, nanny state vision for the American people. They envision a society where risk and failure are banned and reward is disparaged as greedy; where humanity is stripped of its will to succeed in the name of social justice; “fairness.”

They encourage, not individual achievement but a “shared sacrifice.” They see our lives sacrificed to the state or to one man’s vision.  That my friends, is not living.

We see this in the unconstitutionally mandated ObamaCare, increased regulation and tax on some of our greatest industries such as coal, oil, aeronautics, and the punitive tax on society’s greatest economic contributors.  That nanny state vision may temporarily sustain us but will never fulfill us.

We want to once again feel in our stomachs the knot of anticipation and dread of failure we felt as kids when the training wheels finally came off.

The fire in our bellies as our mothers and fathers ran alongside our bikes, encouraging us as we peddled faster and faster. We want all of us to experience that awesome sense of pride, that feeling of exhilaration, the adrenaline rush of pure freedom when we out raced our parents for the first time and felt their last push as they ultimately let go.  We were finally on our own, if only for a short time. It was scary but it felt great.

We also need to remember and learn from that feeling when we crashed our Schwinn Sting Rays into the neighbor’s bushes. We may have been scraped and bruised but we got back on our bikes and tried again.  No one bailed us out.  Instead we were motivated to succeed. Like success, failure is part of life.  Those of us who have played sports know failure pushes us to work harder and appreciate success even more.

Like our fore-fathers who set the groundwork of freedoms that led to our country’s success, it was our fathers and mothers who pushed us to our freedom as individuals.

I don’t know anyone who recalls their nannies running alongside their two wheelers pushing them to succeed.

Government largess may sustain us but will never fulfill us.

As we all know, today our Second Amendment Rights are under attack. If you do not own a gun or plan on never owning a gun, I understand.  That is your right and we all support you, but make no mistake you are still in this fight.

The Second Amendment, the right to bear arms, is a right of the people guaranteed in the Constitution, as much as freedom of speech, as much as your religion and as much as our peaceful assembly here today.  These “common sense’ gun control laws are as much about guns as ObamaCare is about health. As Rahm Emmanuel infamously said, “Never let a good crisis go to waste.”

These loathsome politicians have used innocent deaths for their political gain, secretly and urgently, ramming through laws designed to destroy our God given rights and in the cases of your health and arms, our ability to protect our very lives and those of our families.  The second amendment was not ratified for hunters as the media and politicians would have you believe. It was guaranteed as a safe guard against our own government’s tyranny; protection against the same elites that now put our rights under siege.

George Mason who authored the Virginia Declaration of Rights and co-authored with James Madison the Second Amendment responded to his own question, “I ask sir, what is the militia? It is the whole people. To disarm the people is the best and most effectual way to enslave them.”

Thomas Jefferson concurred, “Those who hammer their guns into plowshares will plow for those who do not.”

John Adams believed, “Arms in the hands of the citizens may be used at individual discretion for the defense of the country, the overthrow of tyranny or private self-defense.”

Thomas Paine, author of Common Sense, wrote, “Arms discourage and keep the invader and plunderer in awe, and preserve order in the world as well as property… Horrid mischief would ensue were the law-abiding deprived of the use of them.”

We are all in this together as the founders were.  Let’s offer a little real shared sacrifice to one another and risk something for our country.  I am not asking for you to risk your job, your life or your family as the founders did, but perhaps your time, donations to the right causes and maybe even risk a friendship or two for the truth.

The founders risked their lives and their children’s future by acting.

We risk our lives and our children’s future by not acting.