Joe Connor, co-author of The New 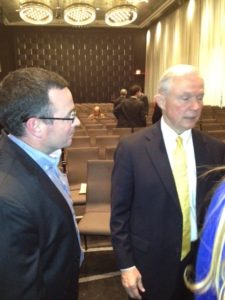 Founders and a relentless advocate for justice (testified against Eric Holder at his 2009 Senate Confirmation Hearing), urges Republicans and Democrats to vote to defund ObamaCare.

In 2009, at the invitation of Senate Republicans, I testified against Eric Holder at his Attorney General Confirmation Hearing before the Senate Judiciary Committee. Yet almost half of those Senate Republicans (19 of 40) ended up voting FOR Holder.

When told by Republican leadership at the time, “We have to pick our fights,” I fumed, that if opposing Holder was not the principled fight to choose, who or what would be? After all, as Deputy Attorney General under Bill Clinton, Holder orchestrated the 1999 clemency to Puerto Rican terrorists. Holder and the Clintons played Russian roulette with the American people by unleashing 16 unrepentant FALN members, who claimed my father’s murder. Here was the nominee for our chief law enforcement officer, sworn to protect all Americans, masterminding a terror jailbreak for pure politics, in order to satisfy Hillary Clinton’s 2000 senate ambitions.

Could there have been a more principled fight?

Last week, after almost five years, I again met Senator Sessions, in 2009 a ranking Senate Republican on the Judiciary Committee and astonishingly one of the 19 Republican senators who voted for Holder.

To his credit, before I could ask him why, Senator Sessions admitted voting for Holder was a mistake and offered that I could say, “I told you so.” Declining the offer, I reminded the senator of the “We have to pick our battles” explanation from 2009. When he replied, “We still do,” I urged Senator Sessions, and by extension the Republican establishment, to finally take a stand and fight principled battles, even if they are against the odds. That’s what leaders do, and what the American People deserve. Those who wait for certain victory are not leaders, but merely opportunists.

The right battle to fight today is the defunding of ObamaCare. It is a fight for Liberty against the odds, like our founding itself. If our senators and congressmen are truly successors to our founders who risked, not a mere election, but their very lives for Liberty, then is it too much to ask all Republicans and Democrats in the Senate to stand tall, not cave in to pressure as they did when confirming Holder, do what is right and defund ObamaCare?

As Thomas Jefferson wrote, “Political interest can never be separated in the long run from moral right.”