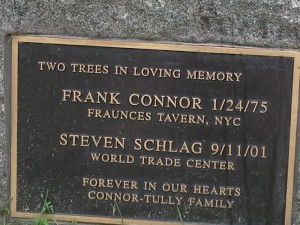 The row of colored flags eked, creaked, and fluttered in a gusting, biting wind that swept across the hill. The guide raised her voice above the shrill as the people drew closer so as not to miss a word, wiped their eyes and bent their heads. It was Shanksville, Pa. September, 2007 and was like no other I had ever heard.

I looked down from this hill at the beautiful valley with its lush green grass, and vegetation. I saw a lone flag hold on, as if for dear life, to a wire fence. The trees and grass swirled and swayed as the red and white stripes folded in and out, reveling small white stars on heavenly blue. Yes, it was Old Glory and it was keeping guard on the spot where Flight 93 crashed, and with it forty of the bravest people America has to offer.

A temporary memorial atop the hill with a forty-foot fence is decorated with flowers, letters, artwork, stuffed animals, badges, flags, and many other items. The thousands of visitors who come here each week can write their thoughts in journals provided on the sight. No one sat on the benches where the names of the forty people who perished are written. It would have been disrespectful to do so! Instead, people gathered around the Ambassador (guide), who serves as human contact, to hear every word of how the passengers and crew planned to take back flight 93 from the terrorists, knowing that they might have to give their lives.

All of this has been told on TV and in the movies but as the saying goes, “you would have to be there” to get the full affect of this horrific crash and the terrible loss of these beautiful people.
I like to believe the dew on the grass is their tears. The birds flying overhead are their spirits calling out to us not to forget them and to remember that freedom comes at a price! A pride swelled within me that somehow the lives lost here were not in vain. Had these brave people not succeeded in their attempt to divert the terrorists from their intended target, the Capitol, our country could have been devastated.
I sat in my car and shivered. I looked at that peaceful farm house on the hill and thought about the terror the people within must have felt on seeing flight 93 hurling out of the skies on that beautiful Tuesday morning. I let my mind wonder to what it must have been like during the last few minutes on Flight 93 before it came crashing down, twenty-five feet into the ground.

Did these forty people have a moment to grab for the pictures in their wallets? Did they kiss the smiling faces of their family? Did they shed a tear? Did they utter a prayer before “let’s roll,” rang out and they stormed the cockpit?
I asked the same questions when my husband, Frank Connor was killed while having lunch in Fraunces Tavern, NY City, by the FALN terrorists group, in 1975, and again on 9/11 when another member of our family, Steven Schlag, was killed at the World Trade Center.

These are some of the thoughts that haunt families whose loved ones die at the hands of terrorists. Did they have time to say, “I love you guys,” either out loud or in their hearts?

And now I ask myself, what the terrorist hijackers might have been thinking. Did they hesitate for a moment to consider that they were about to murder 40 innocent people?

Did they, also, shed a tear for their families? But then again, their families would benefit financially from this horrific act. They would be seen as martyrs for the cause of Islam. Finally, did they invoke Allah’s name as the cockpit door was thrown open?
Americans must never again be caught off guard. We now know that plots are being hatched against us, all over the world, even in our own country. We cannot let the droning politicians lull
us into the belief that, if we sit back and “play nice” everyone will love us.
I am so glad I got to Shanksville before the permanent memorial is created. I believe the spirits of these 40 people fill this beautiful meadow, and the hallowed ground it has become, just as in ground zero. They are now a part of our history and every child will stand taller on hearing of their bravery.
To quote Lincoln’s words from his Gettysburg Address, “It is for us the living, rather, to be dedicated to the unfinished work which they who fought here have thus far so nobly advanced —
———– that from these honored dead we take increased devotion for that cause for which they gave the last full measure of devotion …”