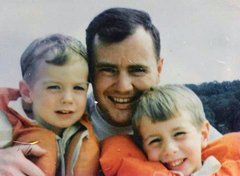 From 1974 to 1983, the Marxist Puerto Rican terrorist group, Armed Forces of National Liberation (FALN) attacked the citizens of The United States with over 130 bombings — murdering 5, including my father Frank Connor, and wounding dozens more.  In the early 1980s, FALN members were arrested, tried, convicted and sentenced in Chicago to appropriate jail terms of up to 70 years.

President Clinton, in an obvious attempt to gain traction for then first lady Hillary Clinton’s senate run, in 1999 (with help from then Deputy Attorney General Eric Holder) offered clemency to these unrepentant terrorists. Incredibly, none of the terrorists even requested clemency.  Further FALN leader Oscar Lopez Rivera refused Clinton’s 1999 offer and chose to remain in prison. Only victims and family members’ face to face meeting with Lopez at his 2011 parole hearing has kept Lopez in prison.

On January 24th, the 39th anniversary of the horrific murder of my father during the lunchtime bombing of New York’s historic Fraunces Tavern, I remembered Frank Connor and debated lawyer and activist Ron Kuby on WABC’s Curtis and Kuby radio show. Here’s that audio:

As recently as November 30, 2012, current New York City Council Speaker (second only to the Mayor of New York City) and then Councilwoman Melissa Mark-Viverito passed around a petition advocating the release of Oscar Lopez Rivera.  In the petition, organizers asserted that Oscar Lopez “was not accused or convicted of causing harm or taking a life.”

That is simply not true.

The seditious conspiracy that Oscar Lopez was convicted of included 28 bombings that maimed several people and could have killed. For example, 5 people were injured in the June 7, 1976 FALN bombing outside the First National Bank of Chicago. Among them were Richard Schwartz and his wife. Fragmentation from the bomb tore through Schwartz’ throat and vocal chords, leaving him voiceless and choking in his own blood. His wife suffered permanent ear damage and loss of hearing.

On June 25, 1976, four FALN bombs detonated in New York City outside the 40th Police precinct, two banks, and the Pan Am building. None of these bombs fully exploded. The unexploded dynamite recovered from them matched that found on October 27, 1975 in an unexploded FALN bomb outside the Standard Oil Building, Chicago. All of the dynamite had been stolen from a Colorado company and had been manufactured for use at the Heron Dam project in New Mexico.

On October 15, 1977, unexploded FALN bombs were found in Chicago. One device was found by children playing outside a National Guard Armory building. The dynamite within it also matched that stolen in Colorado. The device had “pegged,” meaning the timer had gone off and completed the electric firing circuit.  Fortunately, it did not explode when one child knocked it from a window ledge. Ironically, the children were Hispanic.

The recent terror petitioners disgracefully omitted that once in prison, Oscar Lopez Rivera was convicted and sentenced to an additional 15 years for planning an aggressive escape from Leavenworth Prison that involved C4 plastic explosives, automatic weapons, the killing of prison guards, and the use of a helicopter. Only the FBI’s diligence foiled their violent plot.

It is very telling as to how the Left in this country seeks to manipulate the citizenry with half truths, Orwellian language and flat out lies.

Certainly the push for a second clemency for Oscar Lopez Rivera will continue and may not end until President Obama’s last days in office.

Thank you for listening. Please be vigilant, trust yourself, pay attention and fight for what you know is right.