Obama and our so called leaders dither on our national security, focusing the full might and ire of the federal government on a police officer in a very tragic, although local matter, while our greater American family is attacked once again, epitomized by the savage beheading of Jim Foley.  Make no mistake we are at war.

Michael Brown, Officer Wilson, certainly Mr. Foley and all Americans deserve better than Washington paying lip service to the grave threats to all Americans; instead choosing which politically advantageous events to focus their brand of justice on.

This “Political Justice” (“PJ”) we get from Washington is destroying our country, dividing us as people and making us more vulnerable within and without. 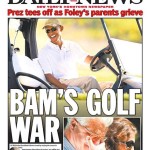 Now this government talks semi tough then backs off from the next generation of islamic terrorists who butchered Mr. Foley, murdered our father’s godson, cousin Steve Schlag and 3,000 other innocents on 9/11 as I witnessed the carnage only blocks away from Fraunces and WTC. We the People are just plain mad.

Lincoln said, “America will never be destroyed from the outside. If we falter and lose our freedoms it will be because we destroyed ourselves.”

Unfortunately, 150 years later Mr. Lincoln understands us and our 21st century world better than our current government does.

Now let’s stop treating these IslamoNazis as common criminals, call in the B52s and crush these Isis cockroaches.

3 thoughts on “ISIS, Ferguson, Holder and our upside down world”