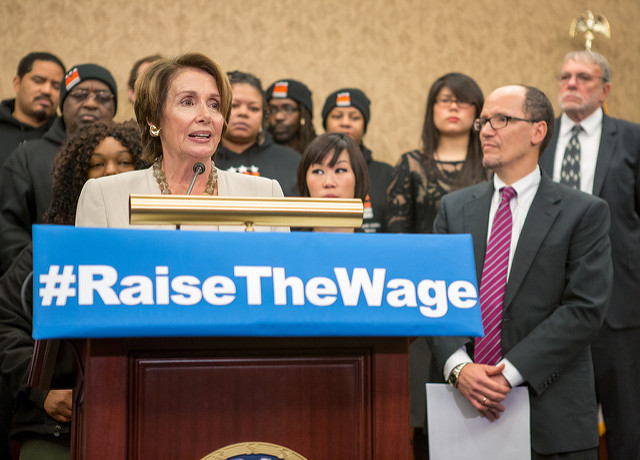 “I have always believed that when unions are strong, families are strong and America is strong,” says Hillary Clinton on her campaign website. Indeed, the Democratic party has long supported labor unions and long enjoyed their generous campaign donations and unwavering political support. It is curious then, why they would make it one of their policies to support large-scale immigration reform and a path to citizenship. These are policies that, in theory, bring millions of unskilled laborers “out of the shadows” and into direct competition with union employees. The answer is pretty obvious: the Democrats need the Latino vote in order to win a presidential election. What is less obvious, however, is why this policy is tolerable to the unions, and how the Democrats can both get the Latino vote and maintain union support.

The answer can be found in the Democratic Party Platform for 2016. If elected president in November, Hillary is going to increase the minimum wage to $15 per hour and increase eligibility and funding for social welfare programs, such as affordable housing. The result of these two policies, if implemented, would be to decrease job opportunities for low-skilled labor outside of unions and compensate for the lack of income created with welfare programs. The end result is that difficult-to-fire union employees will be paid $15 per hour at minimum and millions of immigrants would not be able to find legitimate work, leading them to be forced to work off the books and for below minimum wage, making next to nothing, and be forced to rely on government handouts to sustain themselves. This dependence would, ironically, force them to vote, in future elections, for the same democrats who put them in poverty.

Minimum wage increases are the means by which unions would come out on top despite a large influx in unskilled labor. “[Democrats] believe that Americans should earn at least $15 per hour and have the right to form or join a union and will work in everyway we can—to reach this goal” (from the platform). This policy will have the same effect as making it illegal to hire a majority of the immigrants from Latin America. As Nobel Prize winning economist Milton Friedman explains, raising the minimum wage means that employers can not hire people whose skills are not worth that wage (in this case $15/hr). To model this situation, let us say that a job on the manufacturing line for a pen company pays $7.50 per hour. This pen company values the labor of that line worker at $7.50/hr, his skills are worth roughly $7.50/hr. If the government suddenly steps in and tells the company that they have to pay their workers $15/hr for the same work, they will cease to hire those workers that they value at less then $15/hr. They are not going to pay someone twice what their skills are worth; they are either going to hire someone whose skills they deem to be worth the $15/hr (maybe an individual who is twice as productive) or they are going to purchase a machine that will do the work at a cheaper rate. Either way, the point remains—the man with skills worth only $7.50/hr will be competing with people that are twice as qualified or efficient as he.

The increased collective bargaining rights for which Hillary is also fighting will make it infinitely easier for union members who are not worth the $15/hr to become employed or retain employment, at the expense of those outside of the union. In this way, the union is bolstered in strength, despite the influx of cheap labor, and more money is available to be donated to the Democratic Party. In short, the Democratic Party again shows it is the master of putting political ambition ahead of the American people. They are able to take advantage of immigrants seeking the American dream to gain votes, and trade that dream for contributions from labor unions.

Instead of the American dream, these people will be fed welfare programs that keep them voting Democrat. On page five of their platform, the Democrats set out plans to increase the supply of affordable rental housing by increasing funding for the National Housing Trust. They also plan on instituting home buying programs and lending incentives (incentives not unlike those that led to the collapse of the mortgage-bond market in 2007 and 2008, the cause of the great recession). By fostering this reliance on government, and more specifically on the Democratic party, they plan to do with Latin Americans what they did with African Americans in the 1960’s and 70’s: incentivizing and increasing government dependence in poor communities, the same policy led to the outrageously high percentage of African Americans that vote Democrat.

A political party has two functions: getting votes and raising money. The minimum wage increase allows the Democratic Party to achieve both these functions, despite the fact that the groups needed to satisfy this dual mandate should be at odds. The minimum wage hike allows them to be infinitely “kind” to Latin American immigrants, gaining their votes, while simultaneously depriving them of income so as to garner donations from a labor union that opposes the cheap labor resulting from immigration. Once again, the Democratic Party favors the powerful at the expense of those hard-working men and women who want little more than to make a life for themselves and their families.