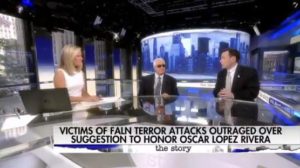 terrorists not only murdered and maimed innocent civilians in NYC at Fraunces Tavern and the Mobil Oil Building among their 120 plus bombings but twice ambushed NYPD officers including Bomb Squad Detective Richard Pastorella.

With the eloquent Detective Pastorella blinded by an FALN bomb, Joe demand on The Story with Martha MacCullum, “If not for terrorism, what did Lopez do to win this “Freedom Hero” award and push the Independence of Puerto Rico?”   This is no answer.

Please click here or the above link for the 4 minute segment.

At a presser outside Fraunces Tavern, Joe and Mayoral Candidate Nicole Malliotakis condemned Mayor deblasio, and other NY politicans for supporting terrorist Lopez Rivera as a hero.

Chasing News was the only news show to chase Lopez to his “Welcome” in the Bronx.  Thanks to Diana Blass for reporting and discussing.

There are so many great people, stories and issues arising it is impossible to capture even a small fraction.  Please GOOGLE the Puerto Rican Day Parade for more information and stories.