Before Al Qaeda and 9/11 the FALN were Puerto Rican terrorists doing bombings around NYC.

One was at Fraunces Tavern near the South Street Seaport. Fraunces is where George Washington bade farewell to his officers – the oldest continuously operating restaurant in The United States.
On January 24, 1975 a bombing at Fraunces Tavern at lunch–time murdered young Frank Connor – Joe’s dad. Joe was just nine then, but has been seeking justice all of his adult life. The Clintons/Eric Holder and Obama/Biden handed clemency to the FALN terrorists; one of them received clemency twice!
Joe’s family was hit again on 9/11/01, with the murder of his cousin Steve Schlag, dad’s godson, as he witnessed the attacks having just commuted through the WTC.
Please join us next Monday, November 16 at 7 pm ET to hear the incredible story and Joe’s never-ending fight for justice.
Register here: http://bit.ly/Alert-Joe-Connor 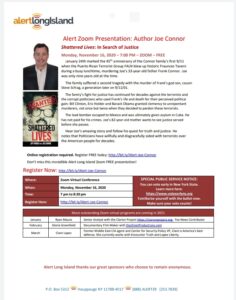