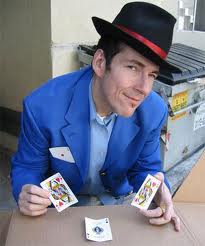 We’ve all heard Barack Obama bark his grandiose, empty promises and platitudes for the last four years as America’s standing in the world significantly diminishes under his presidency. Our economy teeters like a house of cards thanks to the sleight of hand of his big government policies.

Why then do about half of all Americans still cling to the proven failure of his Hope and Change scam?

A decade ago, I started a new job and was introduced to my predecessor Monte, who would remain on the job to assist me in managing an atypical, problematic and complex client relationship.

I was hired because for the previous several years this client was dissatisfied with our service while Monte repeatedly, calmly and convincingly reassured management that all was well. He claimed the client was over reacting, he had it under control, all would be fine and our busy management should focus on other things.

Management bought it, at least for a while.

Three Card Monte’s reassuring tone and deflective double talk worked. Like Obama to the American people, Monte told management what he knew they wanted to hear. Monte’s smooth talk hid his errors for years. I, myself, was at times taken in by his assurances. “Don’t worry, I got it covered. Go home and enjoy your family. This is all fine.” Those words sounded good to me too.

Three Card Barack has dealt the same scam on America as Monte did on our management team but on an unprecedented scale.

Obama tells a very busy population exactly what they want to hear; that he has them covered and they don’t have to worry about anything. That’s enough for scores of millions of people who, like our busy management, have so many other issues and problems to deal with.

Monte and I are gone from that job now, but at least I learned a lesson that I hope half of the American electorate learns before November 6.

When Three Card Barack or any politician for that matter, draws you in with his words and deals you a hand, call him on it, make him show his cards and elect the person who provides the truth and not just a slick card trick before we all cash in our chips.