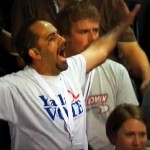 They showed their true colors and true beliefs.

First, they purposely left the line supporting Jerusalem as the capital of Israel off of the Democratic policy platform. Then, of all things imaginable, they omitted any reference to God from the platform as well. The rocket scientists who made this decision had to know there would be criticism. Yet they still pushed ahead with this platform because it was and is this party’s truly held viewpoint.

One can surmise that only when Obama realized that his stamp of approval on the platform would hurt him in the pocketbook as wealthy donors of both the Jewish and Christian faiths would pull their checkbooks did the president change his stance. And when the language was inserted back in, the convention contingent voiced the true feelings of their leader and the radical fringe that has taken over the party of John F. Kennedy.

In a million years, could you ever fathom an arena full of Americans booing the Almighty? The country watched dumbfounded as the angry throng booed the insertion of God and Jerusalem into the platform and orally voted against it. And when the nays outweighed the ayes (by quite a lot), the Democratic hierarchy did not know what to do. After three tries, it was evident that the two-thirds majority needed to approve the change was not going to happen. Only then did convention chairman Villaraigosa finally read the words that the teleprompter kept flashing in his face: motion approved.

Of course, the media swept this under the rug and focused only on Bill Clinton’s marathon speech. Even a Democratic friend of mine was appalled by the reaction and could not believe that the media was not reporting on it in more detail.

Add Caroline Kennedy’s disgusting promotion of abortion and you have the full alienation of right-minded Americans of both the Jewish and Christian faiths.

And hopefully, right minded Jewish and Christian Americans will realize the true colors of the president and the current Democratic Party and vote accordingly in November.