As an American born two and a half years after the August, 1963 March on Washington, our parents instilled in my brother and me Dr. King’s admonition to “judge people, not by the color of their skin but by the content of their character.” 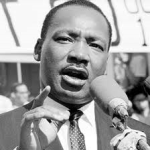 Today, however, Dr. King’s dream has been subverted by the very Left who hypocritical claims his legacy. The Leftist race hustlers of the 21st century look first at the color of their fellow Americans’ skin, implore us not to judge bad character while attributing the motive of hatred to anyone who disagrees with them.

“Civil rights” leaders Al Sharpton and Jessie Jackson (who have made careers creating a civil rights industry based on inflaming prejudice), pundits and politicians including President Obama and AG Eric Holder, who have invoked race into several recent issues, attempt to silence as racist, dissenters from the this administration’s treacherous agenda.

Contrary to Dr. King’s dream and our constitutionally guaranteed God given right to free speech, they demagogue race to silence debate.

Supporters of national sovereignty through border control and voter identification are routinely impugned as racists. Americans who attempt to correctly identify our enemies as Islamic Extremists are labeled Islamaphobes. Police trying to reduce crime especially in minority areas through proven law enforcement techniques like stop and frisk are assailed by the ACLU. Even the great United States Military, has participated in quelling our first amendment right to free speech. Just recently a Department of Defense memo referred to the Founders of our nation as “extremists” implying they would be potential terrorists today. This is outrageous!

Less than 12 years after Dr. King’s words of national unity and only 7 years after his assassination, my 33 year old father, Frank Connor was murdered by the Puerto Rican terrorist group FALN while eating lunch with clients at New York’s historic Fraunces Tavern, because of the color of his skin. Quoting the FALN’s words in their January 24, 1975 communiqué, they targeted Fraunces to kill “Reactionary Corporate Executives.”

After our father’s murder, we continued to live by Dr. King’s creed and never heard our mother or our grandma Connor utter a word of hatred against the Puerto Rican people. Even after 9/11 when our father’s god son, cousin Steve Schlag was killed, we did not raise the next generation to hate.

We were however raised to tell the truth and fight for what is right regardless of the consequences. As a proud American and a family member twice hit by terrorism, I resent the implication that We the People who believe in the wisdom of our Founders and the God given rights of man are somehow threats while those who hijacked Dr. King’s legacy seeking to destroy our society from within somehow hold the moral high ground.

We have to stand up America and hold each other and our leaders to the beliefs of Dr. King and our Founders. In the words of Thomas Jefferson, “We hold these truths to be self evident that all men are created equal, that they are endowed by their creator with certain unalienable Rights….”

Where will those unalienable rights go when America is no longer?

One thought on “Reflecting on The March on Washington 50 years later, Where will those unalienable rights go when America is no longer?”