Former President Barack Obama and his surrogates in the media and entertainment industries spent the last days and weeks of his presidency attempting to write, or rewrite, his legacy. 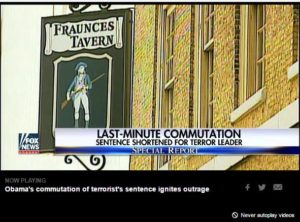 Fortunately, much of his legacy, Obamacare / the Cuba and Iran agreements can be washed away with the stroke of President Trump’s pen.

But Obama’s real legacy, what people will remember is clear:

For decades we have sought justice for Joe’s father Frank and other terror victims.  Joe published an Op / Ed today in the Wall Street Journal challenging Obama’s clemency grant to, and Hamilton creator Lin-Manuel Miranda’s support for, this unrepentant terrorist.

Please see today’s Wall Street Journal piece. If you cannot access the piece, the full text is at the bottom of this page.

The Mark Levin Show (about 45 mins in)

Lastly FALN terrorist fugitives William Morales and Victor Gerena remain at large, as guests of Cuba.  We will work with the Trump administration for their return and that of BLA cop killer Joanne Chesimard and the other fugitives.

Thank you for your support,

Although overshadowed by the clemency bestowed on Chelsea Manning, on Tuesday the news broke that President Obama was commuting the sentence of Oscar López Rivera. The push to release the terrorist had been a cause célèbre in Puerto Rico, the U.S. and Latin America for years. He counts among his supporters New York Mayor Bill de Blasio, New York City Council Speaker Melissa Mark-Viverito and Sen. Bernie Sanders, who labeled López Rivera a “political prisoner” and compared him to Nelson Mandela.

The historical record belies these claims. López Rivera was a longtime leader of the Armed Forces of National Liberation, known by its Spanish acronym FALN, a group claiming support for Puerto Rican independence. It was actually a Marxist organization intent on subjugating Puerto Ricans and imposing a Castro-like communist regime. From 1974 to 1983, the group claimed responsibility for more than 100 bombings and other violent crimes in U.S. cities, making it the most active domestic terrorist group in U.S. history.

The FALN’s deadliest attack occurred on Jan. 24, 1975, when a bomb tore through New York’s historic Fraunces Tavern during lunch hour, killing four people and injuring more than 60. One of those murdered was my father, Frank Connor, a 33-year-old banker with a loving wife and two young sons. Our family planned to celebrate my 9th and my brother’s 11th birthday that very night.

López Rivera organized and personally led numerous FALN bombings, armed assaults and hostage takings in the U.S. and Puerto Rico. He also was a prime FALN recruiter; a crucial trainer in bombing, sabotage and other techniques of guerrilla warfare; and the mastermind behind the establishment of a series of FALN weaponry safe houses and bomb factories. When the FBI finally arrested him in 1981, it found in his residence a large quantity of dynamite, blasting caps and other bomb components.

In 1983, Judge Thomas McMillen called López Rivera “an incorrigible law violator” and an “unrehabilitated revolutionary” before sentencing him to 55 years in prison. He later received an additional 15 years after planning two escapes from Leavenworth, which, had the FBI not foiled them, likely would have claimed more innocent lives.

López Rivera declined an offer of conditional clemency from President Clinton in 1999. He refused to renounce violence or leave behind another FALN member who was not offered clemency—clearly the act of a terrorist leader, not a mere follower. To this day, he has not accepted responsibility for his actions as an FALN leader. In his biography, he whitewashes his violent past. And when other family members of FALN victims and I faced off against him in 2011 at his parole hearing, he remained defiant, offering not a shred of remorse or contrition.

One of the most vocal advocates for López Rivera’s release has been Lin-Manuel Miranda, creator of the Broadway musical “Hamilton.” Last November, Mr. Miranda wrote the lecture an actor delivered after a performance to Vice President-elect Mike Pence. He voiced his concern that the new administration would not “protect us . . . or defend us and uphold our inalienable rights.” Doesn’t that include the right not to be blown to bits while innocently dining in a restaurant?

Upon hearing the clemency news, Mr. Miranda—who like my father was born in the New York City neighborhood of Washington Heights—said he was “sobbing with gratitude” and announced that he would reprise his role of Alexander Hamilton in a special Chicago performance for López Rivera. Ironically, in 1976 the FALN bombed a location near the Chicago theater where “Hamilton” is now being performed. It is the height of hypocrisy for Mr. Miranda to advocate clemency for an unrepentant terrorist and heap praise on him.

In Federalist No. 74, Hamilton defended the president’s unchecked power to grant clemency: “The reflection that the fate of a fellow-creature depended on his sole fiat would naturally inspire scrupulousness and caution; the dread of being accused of weakness or connivance, would beget equal circumspection.” That prediction has sadly been proven wrong.

Alexander Hamilton would be horrified to know that a presidential power he fought for would be used to release an enemy of the country, a leader of the terrorist group that bombed Fraunces Tavern, the very place in which much of “Hamilton” the musical is set and our founders met to plan the blueprint for America.

For the victims of the FALN, which include several horrifically wounded New York police officers, the grant of clemency to López Rivera reopens deep wounds. As in 1999, unrepentant criminals are forgiven while the innocent are ignored. Mr. Obama’s White House didn’t even give us notice of the decision.

FALN leader William Morales, who was the group’s principal bombmaker, continues to live in Cuba under political asylum. Perhaps those who have lauded the clemency for López Rivera will find it in the interest of justice to speak out for Morales’s extradition to the U.S. Nothing will bring my father back, but justice is something I still believe in.