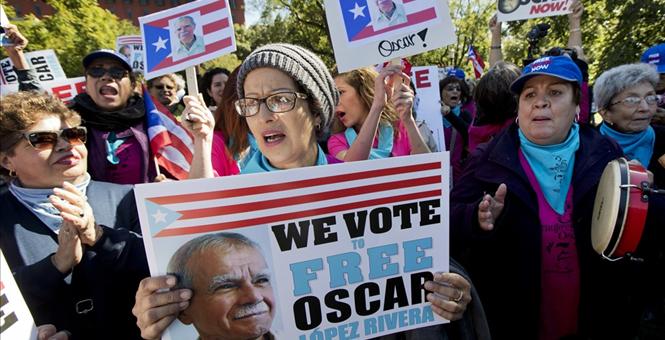 The words “disgrace” and “outrage” do not come close to describing the insanity, insult and pain that honoring this terrorist thug brings to our family, the families of all FALN victims and all Americans. The idea is truly sickening.

New York City was the epicenter for the most horrific of the 120-plus bombings by Lopez’s Puerto Rican terrorist group, the Armed Forces for National Liberation (FALN). One of those bombings killed our 33-year-old father, Frank Connor, and three other innocent people.

Why would anyone in New York salute this man — particularly in the midst of our nation’s war on terrorists? Worse, City Council Speaker Melissa Mark-Viverito chose to make this Alice-in-Wonderland announcement at One World Observatory, the very site of the most horrific terror attack in our nation’s history.

It’s also where my father’s godson, Steve Schlag, was murdered, along with 3,000 other civilians and the true hero first-responders. And where a threat by Lopez’s FALN prompted an evacuation of the World Trade Center in 1977.

And consider: Lopez refused President Bill Clinton’s 1999 clemency grant and chose to stay in prison rather than renounce violence. Yet President Barack Obama offered an unconditional second offer of clemency to Lopez just before leaving office. He’ll be freed next week.

Then the city in which our father was born, raised, worked and was murdered — a city bloodied by the most savage of all terrorist attacks on 9/11 — will play host to honoring him. What’s going on?

From 1974 to 1983, the FALN waged a merciless, bloody war against the United States, attacking civilians mainly in New York and Chicago. On Jan. 24, 1975, the FALN launched its most deadly attack, the infamous lunchtime bombing of Fraunces Tavern — murdering my father and three other innocent men. It was supposed to be the day we would celebrate my brother’s 11th birthday, and my 9th.

An FALN communique that day took credit for the attack, calling it a blow against “reactionary corporate executives.” In fact, my dad was born to immigrants and raised in working-class Washington Heights, very near where several of the FALN members were from.

In the early ’80s, 11 FALN members were arrested, tried and convicted of (among other serious felonies) weapons possession and seditious conspiracy. Lopez was convicted in 1981 and sentenced for crimes including seditious conspiracy, interference with interstate commerce by threats or violence, carrying firearms during the commission of those two crimes and interstate transportation of stolen vehicles.

There was testimony by a cooperating FALN insider that Lopez was personally involved in bombing and incendiary attacks, trained members in bomb-making techniques and had been a prime recruiter for the FALN.

In 1987, he was sentenced to an additional 15 years for participating in a conspiracy to escape.

Yet Viverito and her ilk call Lopez a “National Freedom Hero.” They are deranged.

Some claim he is a “freedom fighter” for Puerto Rican independence against US colonialism of the island. But aside from being a terrorist, what has he done to support “freedom” in Puerto Rico?

The FALN’s first attack, in December 1974, targeted the NYPD, severely maiming Angel Poggi, a young NYPD officer of Puerto Rican descent on his first day on the job. Is this the act of a hero of the Puerto Rican people? Lopez has never represented Puerto Ricans. Never more than 5 percent of them have ever voted for independence from America, and in 2012 fully 60 percent voted for statehood.

Further, Lopez and the FALN’s vision of “freedom” never involved freedom at all for Puerto Ricans but subjugation in a Cuba-like state. It is no coincidence Lopez’s FALN comrade — convicted fugitive bomb-maker William Morales — has been a guest of Cuba for over 30 years. Lopez, Morales and their Marxist comrades were never about freedom, but tyranny.

Lopez never expressed regret nor sought forgiveness, not even in his 2013 autobiography. Nor did he ever cooperate with authorities to bring closure to unsolved FALN crimes.

Despite all this, New York will host a parade that lauds this Marxist terrorist. Couldn’t they find anyone else to honor?

New Yorkers should be fuming. The NYPD and FDNY should refuse to participate. And President Trump should press Cuba to return Morales to face justice. If our father were alive today, he wouldn’t recognize his own city.

Please click here or on the link below for my interview with Telemundo.

One thought on “A Sick Honor, New York politician honoring terrorist as a hero.”