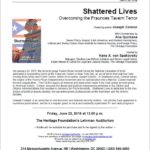 Books will be available for purchase and signature by the authors

On January 24, 1975, the terrorist group Puerto Rican Armed Forces for National Liberation (FALN) detonated a devastating bomb at the Fraunces Tavern in New York City, an act of terror that took four lives.

Among those killed was Frank Connor, father of co-author Joseph Connor. In Shattered Lives, Connor and Jeff Ingber trace the origins of the Puerto Rican independence movement and its radicalization into a Marxist, Cuban-inspired terrorist organization. The FALN’s legacy of violence and destruction made it the most active terrorist group in American history.

Connor recounts the deceit and political maneuvering entwined in the Clinton and Obama Administrations that resulted in clemency for FALN terrorists. Shattered Lives is dedicated to the true victims of political double-dealing: the law enforcement professionals on the front lines and the victims’ families.