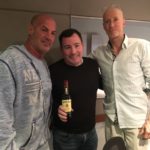 Shattered Lives is getting great reviews for bringing the truth about these released terrorists and the craven politicians who use terror victims lives and deaths for their political gain.

Additionally on Fox & Friends First Todd Piro and Joe dug into the politics of Gina Haspel’s nomination as CIA Director. Again, elected officials putting politics over the safety of America.

Look out for more upcoming interviews.

Shattered Lives is available on Amazon.