As published in National Review January 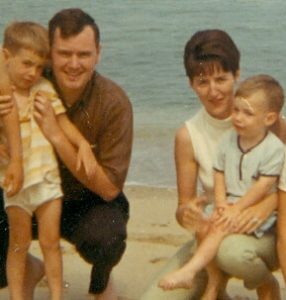 FALN Terrorists Murdered My Father and Have Not Seen Justice | National Review:

Forty-four years ago today, terrorists shattered my family. Sadly, the war against these individuals and their benefactors continues to this day.

My father, 33-year-old Frank Connor, and three other innocent men were murdered, while scores were injured and maimed, on Jan. 24, 1975, when the Marxist Puerto Rican terrorist group Armed Forces for National Liberation (“FALN”) blew up New York’s historicFraunces Tavern during a crowded lunchtime. The FALN appointed themselves my father’s judge, jury, and executioner, profiling, targeting, and savagely murdering so-called “reactionary corporate executives.” The Connor family had planned to celebrate my ninth and my brother’s 11th birthday that very night.

Fraunces Tavern was targeted by the FALN — who paid lip service to independence but in reality sought to impose a Cuban-style socialist regime in Puerto Rico — for its proximity to Wall Street and for its storied reputation as the birthplace of American liberty. Alexander Hamilton and the Sons of Liberty met there. General George Washington bade farewell to his officers at Fraunces after the Revolutionary War.

Between 1974 and 1983, the FALN claimed responsibility for over 130 bombings in the U.S. and Puerto Rico. Though never prosecuted specifically for the Fraunces bombing, the unrepentant terrorists served only 18 years of prison sentences ranging from 55 to 70 years. As Hillary Clinton geared up for her 2000 New York Senate run and was looking to connect with New York’s Hispanic community, Bill Clinton granted clemency to the FALN, a blatant political gesture orchestrated by then–deputy attorney general Eric Holder. One, leader Oscar Lopez Rivera, was so dedicated to his cause and his comrades that he refused the 1999 Clinton clemency, although in 2017 he accepted an unprecedented second presidential clemency from Barack Obama. It was one of Obama’s last acts as president.

Adding to the injustice were New York City politicians’ failed attempt in 2017 to bestow a “Freedom Hero” award to the Marxist Lopez, and Hamilton director Lin-Manuel Miranda’s honoring Lopez despite the fact that Fraunces Tavern was frequented by the real Hamilton. It sickened me to watch the politicians cozy up to Miranda in Puerto Rico last week while 800,000 federal employees remained unpaid.

William Morales, chief FALN bomb-maker, was not offered Clinton or Obama clemency. Morales likely built the deadly devices used at Fraunces and the Mobil Oil building, where, in August 1977, 26-year-old Charles Steinberg was horrendously murdered. On July 12, 1978, which would have been my dad’s 37th birthday, Morales blew off part of his face and nine of his fingers when a bomb he was crafting exploded in his Queens bomb factory. The apartment contained explosives, incendiary mixtures, tools, FALN communiqués, and even the copy machine used to make the FALN communiqués, including the Jan. 24, 1975, communiqué found after the Fraunces bombing.

Morales was captured, tried, convicted, and sentenced in 1979 to up to 99 years in prison but escaped from Bellevue prison hospital with the assistance of other radicals who called themselves the Revolutionary Armed Task Force. During the state trial, Morales boasted: “No jail is going to hold me forever. They can put 1,000 of us in jail. They are not going to hold us forever. That’s what I have to say.”

Through a FALN investigation run by the Chicago Terrorist Task Force, Morales was located in Puebla, Mexico, in 1983. When the Mexican police closed in, he and an accomplice killed a Mexican police officer. Morales was arrested, charged with being an accessory to murder, and imprisoned in Mexico.

In 1988, ignoring President Reagan’s extradition demands, the sympathetic Mexican government allowed Morales to travel to Cuba, where he remains a guest of the regime along with scores of murderous and felonious fugitives such as Victor Gerena and Black Liberation Army cop killer Joanne Chesimard (Assata Shakur).

Despite Cuba’s sponsoring of terrorists, the Obama administration removed Cuba from the State Sponsor of Terror list. On July 1, 2015, President Obama announced the establishment of formal relations with Cuba before actually visiting the Marxist state in March 2016. As Obama announced his Cuba visit, I immediately began receiving calls, texts, and emails from reporters who knew our family’s longstanding fight for justice. Ironically, I answered those requests from Joint Base Guantanamo, Cuba. You see, I am one of the 9/11 family members fortunate enough to observe the pretrial hearings at GTMO — at the invitation of my cousin Jean Schlag Nebbia, whose brother, our father’s godson Steve Schlag, was murdered on 9/11 as I witnessed the attacks only minutes after commuting through the World Trade Center.

I couldn’t help but lament the difference in the handling of the murders of Steve and my dad. For Steven, we went to war. For my dad, we released his murderers.

Here I was at a U.S. military base in Cuba observing Khalid Sheikh Mohammed and the other high-value detainees in the military tribunal with the death penalty at stake, while simultaneously our president planned a “triumphant” visit to Cuba, a country that supports our father’s murderers. Less than a year later Obama would offer that second clemency to Lopez Rivera, a terrorist I had faced at his 2011 parole hearing much like facing KSM and the others at GTMO.

Our family has fought for Morales’s extradition to the U.S. for decades. It’s been a frustrating struggle, although we were encouraged to see that in 2018, the House of Representatives issued Resolution 664 calling “for the immediate extradition or rendering to the United States of convicted felons William Morales, Joanne Chesimard, and all other fugitives from justice who are receiving safe harbor in Cuba in order to escape prosecution or confinement for criminal offenses committed in the United States.”

If my dad’s murderers can escape punishment, this kind of injustice can happen to any American family. I urge Americans to request that their representatives, their senators, and President Trump join with us in demanding the return of these terrorists — and not pander to terrorists and their handlers in Cuba as Clinton and Obama did. It is time for President Trump to secure the return of these killers under the promise of heavy economic sanctions on Cuba, as he has done to the rogue regimes in Iran and North Korea, and to return Cuba to the State Sponsor of Terror list. We are in an ongoing war on terrorists. Let’s fight them all.

My father’s horrific death has haunted my family for 44 years. I promised my mom that we would get Morales back during her lifetime. She’ll be 81 soon. Let’s get this done.